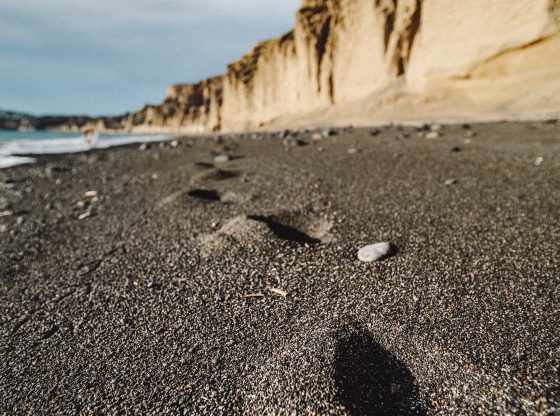 Vlychada still remains one of the few pristine beaches of Santorini, literally untouched amidst hectic times by the voracious developmental aspirations of real estate investors. The beach, its surroundings, as well the background labyrinth of small gorges are unique for their impressive overhanging cliffs and ravines that have been literally chiseled by the Aegean wind on the rough volcanic earth.

The setting of this place is out of this earth, many say. And truly the landscapes of Vlychada resemble exotic lands, extraterrestrial, lunar or even surrealistic! The lack of a road parallel to the shoreline has saved the place from tourist swarms and the usual kitsch tourist infrastructure, and still, even during the peak of the high season, only few visitors are loosely scattered on the black sands by the calm or angry sea.

Alas, recently taking into account that Santorini has become the “Eldorado” of Greek Tourism, this unequaled environment has now reached the verge of being consumed by interests, that sometimes try to evade the law, or lie above it, ready to grasp the chance to exploit and squeeze all the profits a place can provide.

If this happens it will be such a loss and the whole area, instead of being treasured as a precious jewel, will become a loot in the hands of unworthy.