To beer or not to beer

Home /Articles/To beer or not to beer 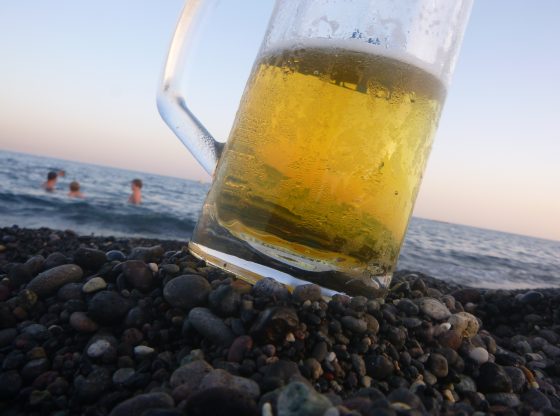 You are now in Santorini, one of the most beautiful islands in the world. The sun is hot, you’ve swum in the Aegean, you can feel the breeze in your hair, everything is almost perfect, but something is missing… a glass of local wine. Or maybe a freezing cold beer! How about trying a Greek one for a change?

Yellow donkey is produced by a brewery in Santorini which opened its doors in 2011. It is blonde, slightly bitter and has citrus taste, which makes it ideal for a day on the beach! There are three other kinds of “Lagered Ales” as they are described: Red Donkey, Crazy Donkey and White Donkey. Their percentage in alcohol varies depending on the type from 5%-6.5%. Once or twice a year, Slow Donkey is produced: a special Santorinian beer with around 9% of alcohol that is not available on the market but which you can enjoy at the brewery in Mesa Gonia. Watch out for the donkey at the label!

Septem microbrewery was founded in 2009 in Evia. In Latin, its name means “seven”, the number that represents creation as it produces one beer for every day of the week. Septem aims in producing unique, unpasteurized beer, and it’s making a great job so far! It has been awarded multiple times in international competitions,  including  the gold medal in International Beer Challenge for “Sunday’s Honey Golden Ale“ in 2012 and gold metal  at Brussels Beer Challenge in 2012 for “Red Ale Mary Rose”. It is not very easy to find, but in case you do you should definitely try “Friday’s Pale Ale”. Cheers!

Nissos beers are produced in Tinos, another small island in the Cyclades.  The Cyclades Microbrewery on Tinos opened its gates in 2012. You can have your choice out of only three labels:  “Nissos Pilsner”, which was awarded a silver medal in European Beer Star competition in 2014, “Nissos Organic All-day” brewed with organic barley malt and  the   “7 Beaufort, Strong Dark Pilsner”, a robust beer with  7% alcohol.

Another beer made in Santorini, with local honey and citrus from Naxos island.  It comes in four types: blonde, black, white and grey, all with 5% alcohol.

Made in Paros, the 56 isles beer hit the market in 2016 and it is made of barley grown on the island. It is named in honor of all the 56 isles of the Cyclades.

Made in Elixi Microbrewery, Delphi beer is a blonde, double fermented beer characterized by its particularly aromatic taste and has won the award of best Greek Pils.

*The new trend coming from Germany is beer-yoga, meaning practicing yoga holding a bottle of beer. A can will not do…

* The world’s strongest beer is “Snake Venom”, which is produced in Scotland and has 67,5% alcohol.

*The world’s most expensive beer is “Antarctic Nail Ale” and costs more than 800€. There are less than 30 bottles available, hurry!

*The oldest brew anyone has been able to replicate comes from a 5000-year-old recipe found in the Sumerian “Hymn to Ninkasi.”

*Cenosillicaphobia is the fear of an empty beer glass

* More Guinness beer is drunk in Nigeria than in Ireland

*There are beer-pools in Austria as beer is rich in vitamins and calcium.  The beer is kept hot, but you can always order a cool one..

*“Hangover” in Norwegian is directly translated to “carpenters in the head”.

*Frosty glasses cause beer to foam.