The Corinth Canal is not just a canal

Home /Articles/The Corinth Canal is not just a canal 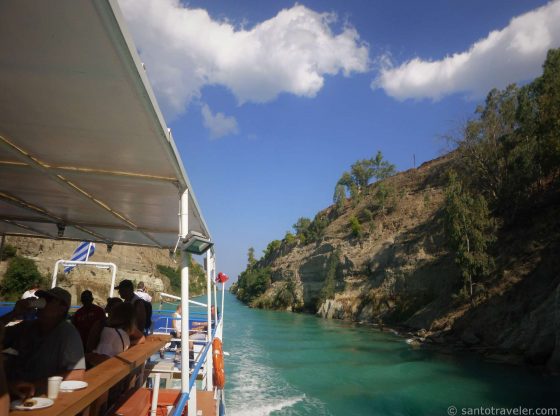 As strange as it may seem, the most popular attraction for foreigners after the Parthenon is the Corinth Canal.

There is no way not to go from Attica to the Peloponnese and not stop on the old bridge to admire the view and take pictures. The canal is not fully exploited yet but the canal was the largest technical project in Greece in the 19th century. Everyday hundreds of tourists cross the canal by boat but also try bungee jumping, kayaking, SUP, swimming and other activities.

The Corinth Canal connects the Gulf of Corinth with the Saronic Gulf in the Aegean Sea. It cuts through the narrow Isthmus of Corinth and separates the Peloponnese from the Greek mainland, making the peninsula an island. The canal was dug through the Isthmus at sea level and has no locks. It is 6.4 kilometres (4 mi) in length and only 21.4 metres (70 ft) wide at its base. In this way, a 3-day trip around the peninsula is done in just a few minutes.

The Isthmia area, due to its strategic location, was inhabited since the 5th millennium BC.
In the area, the celebration of Isthmia became the second most important celebration in the antiquity after the Olympic Games. The celebrations began in 582 BC and ceased after the destruction of Corinth by the Romans in 46 AD.
The archaeological site of ancient Isthmia may not be well known nor a priority for the visitor today. However, it is worth a visit to the place where Isthmia celebration took place and to the museum, where many glass artefacts found in a shipwreck from Alexandria, Egypt
are exposed. In the archaeological site you will see the ruins of the Temple of Poseidon, the stadium, the theater and the Roman baths where an enormous mosaic similar to those in Ostia and Pompeii is preserved in excellent condition.

In the 7th c. BC, the tyrant Periander constructed an overland portage road, named the Diolkos or stone carriageway, along which ships could be towed from one side of the Isthmus to the other and transported merchandise and ideas, making Corinth a commercial and spiritual center. The visitor can see today the ruins of ancient Diolkos at the northern exit of the Isthmus towards the Corinthian Gulf in the area of ​​Posidonia and visit the Center of History and Science. It was about 7.5 kilometers long and was considered a miracle of engineering as its construction took advantage of the slopes of the soil.

Construction of the canal

The Roman emperor Nero was the first to attempt to construct the canal in 67 AD, but the project was abandoned when he died shortly afterwards.

The idea of a canal was revived after the Greek war of Independence from the Ottoman Empire in 1830. In 1881, the Société Internationale du Canal Maritime de Corinthe was commissioned to construct the canal and operate it for the next 99 years. Construction was formally inaugurated on 23 April 1882 in the presence of King George I of Greece. After the company went bankrupt, construction resumed in 1890 when the project was transferred to a Greek company, and was completed on 25 July 1893 after eleven years’ work.

Serious damage was caused to the canal during World War II. On 26 April 1941, Nazi German invading parachutists attempted to capture the main bridge over the canal, defended by British troops. The bridge had been wired for demolition. The Germans surprised the defenders with an assault in the early morning of 26 April and captured the bridge, but the British set off the charges and destroyed the structure.

Three years later, as German forces retreated from Greece, they used explosives to set off landslides to block the canal, destroyed the bridges and dumped locomotives, bridge wreckage and other infrastructure into the canal to hinder repair work – the relevant footage can be found in youtube.

Crossing the canal with a tourist boat is an awesome experience. The trip starts from the Coast Guard Office at the end of the canal in Isthmia and cross the whole channel to the other side and back. There are more boats doing longer trips to Aegina and Agistri islands that pass through the canal too.

Naturally, due to its difficult terrain, the canal has experienced financial and operational difficulties. The narrowness of the canal makes navigation difficult; its high rock walls channel high winds down its length, and the different times of the tides in the two gulfs cause strong tidal currents in the channel. This year landslides blocked the canal and ceased its operation for several days.