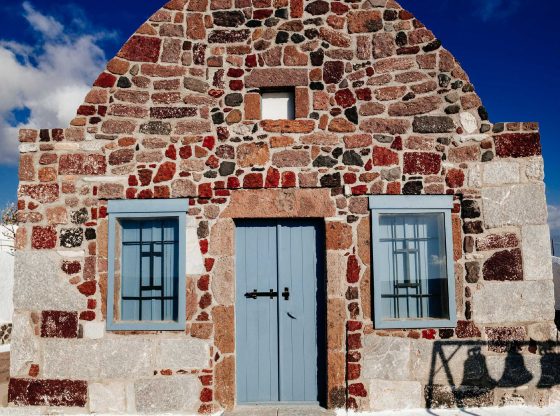 By Vangelis I. Paravas

“Santa Marina, one of the hundreds of hidden chapels of Santorini”

Santa Marina of Megalochori (Aghìa Marìna) is a small basilica chapel, laying just before the cliff of the caldera, facing the Kammenes islets in central Santorini. The small church was built between 1537 and 1650, out of the boundaries of the nearby settlement, surrounded by the famous vineyards of the island. The chapel is privately owned by the Akylas family.

Recent renovations under the auspices of the Hellenic Ministry of Culture revealed an interesting part of the history of the church. Bellow the ubiquitous white plaster covering the exterior walls, thumping ancient carved marbles were discovered, many of which decorated with inscriptions and reliefs.  Considering the lack of such building material on the island, the origin of the marbles is thought to derive from ancient temples that were dismantled to provide those valuable elements. Apart from its unusual past, Santa Marina possesses icons of unique beauty, as well as an important wooden temple including a captivating orthodox painting of Archangel Gabriel on its left door.

However another important aspect of Santa Marina, omnipresent in all Santorini’s chapels and religious history, is the celebration of the nameday of the Saint. Early in the morning of the 17th of July, as well as at its eve, the Akylas family prepares a full feast, with the traditional panigìri, during which food, wine as well as the blessed bread is provided to more than 500 of revelers that visit the chapel to celebrate the Saint’s day. Traditional delicacies like split peas, stewed beans, sardines, local tomatoes of Santorini, and dry white Assyrtiko wine is prepared in the small kiosk by the church and served to visitors, after the morning mass.

These feasts, still widely observed on the island are some of the few surviving old cultural customs of the Aegean Archipelago. Once these celebrations served the purpose to provide food to the poor, especially when the populace of Santorini used to be famished only half a century ago. Nowadays this custom has evolved to a celebration of the unique cultural identity of the Cyclades, and hopefully will be preserved by the generations to come.

Learning Holidays
A day out of the ordinary