A day out of the ordinary

Home /Articles/A day out of the ordinary 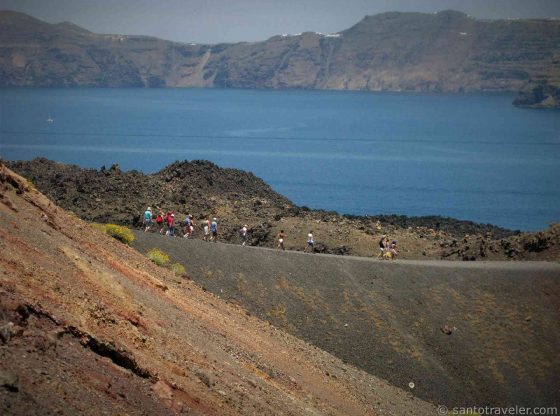 If you are one of us, the ordinary people, you rarely have the chance to walk on an active volcano. On my trip to Santorini I decided to become one amongst the blessed few and take a trip there, it seemed like the perfect opportunity.  There was not much chance of doing it any place else, was there?  It truly was an amazing experience but a few tips might save you a lot of trouble…

Down to the harbor

I booked our tickets in Fira, a few days in advance. We chose to take the boat that was conveniently leaving from the old harbor in Fira. As I have a fear of heights I preferred not to take the cable car but use the steps instead.  Well, I shouldn’t have,   it’s no piece of cake walking down there! Not because of the sun that made me sweat all the way or because of the distance. But I never expected that these wide steps would be so extremely slippery that I would almost slip and slide every ten meters. Most of the people that were near would also go extremely slowly, reaching for the rocks in order to keep their balance.  And as if that wasn’t enough, the donkeys that carried people from the harbor to Fira seemed to have no sense of direction!  Some of them would go right, some left, leaving me wondering if they at last started a rebellion and decided to tread on every tourist in sight. And trust me, you do not want to know anything about the smell…

When we finally reached our destination in one piece, we bought hats and water- things we should have done an hour earlier but hey, it’s never too late to do the right thing!  Our boat arrived on time and it was from another era, probably a better one. We started our small journey to the volcano feeling like Jack Sparrow, only with beer instead of rum. The sun was shining, music was playing, the air was playing with our hair, life was good.

Riding on an active Volcano

The volcano in Nea Kameni is surprisingly close, about 10-15 minutes by boat. When we hit the shore it became apparent that this time we had to climb up. Not to worry, it’s not a big deal even for us who do not like exercise much.  The most tiring walk is the one up to the first stop – it gets easier from there. Besides, you can stop at any time, though it would be a pity.  Our guide told us all about the story of the island, how it used to be round, about the Minoan eruption and how we had nothing to worry about being on it – some of the group were rather worried about it, believe it or not. There were huge black and red rocks everywhere, it felt like a giant’s playground.  Rather impressive, but we expected no less. Seeing Santorini from the top was great but you also shouldn’t miss the view from the back side of the volcano, where you see Old Kameni (the older, smaller volcano) and the almost emerald sea between the two Kameni.  Who knew that Santorini would also have green waters? We took some photos to prove that we made it all the way – if anybody asked – and the next part of the trip began, this time to the hot springs.

The hot springs, as they are called, are not springs and are not hot. It’s a part of the sea near the shore of the volcano that has an almost orange color due to the high percentage of sulfur in it. They say it is luke-warm and healing, but we were warned that swimming there might leave a stain on our bathing suits. Either way, it seemed rather weird to me to swim in orange waters so I avoided it by splashing near the boat where the sea has its original color –blue, that is.

The boat stopped a little off the shore for a swim, and I must tell you that the water there has a color that I have never seen before. It’s not green, orange, turquoise or deep blue, it’s rather something in between the last two. It is actually beyond description, I highly recommend taking a dive there. Do not forget to take pictures like I did, I’m still regretting it.

After all that exercise – and beer – a barbeque was just what we needed. We were served local dishes, Greek salads, potatoes, meat on sticks and local wine, all that you can eat and all very tasty. When the feast was over we headed to Oia where we made a stop to watch the sun set.  Out of the blue, a young saxophonist started playing, just to make a great moment perfect. I have to admit he caught me by surprise at first but music easily took all the cynicism away after just a few notes.

But that was just our trip. Every cruise might offer a different schedule, different menu, different surprises. If you decide to go for it, check these things out. It doesn’t matter if you are a couple on a honeymoon or a group of friends, you are bound for a lovely time out of the ordinary – and that’s a promise!

On our arrival, six hours later, we took the cable car back to Fira, I was not about to make the same mistake twice. I dared take a look outside and the view was well worth it. The ride only lasted a few minutes so even if you are afraid of heights, please don’t miss it. There are some things that photos just can’t describe and Santorini is the living proof of that.

So, until your next trip… ahoy mates!