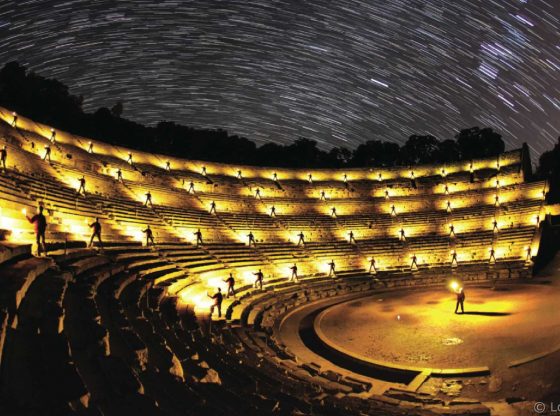 GREEK FESTIVAL AT THE ANCIENT THEATER OF EPIDAURUS

History of the venue
The Sanctuary of Asklepios at Epidaurus, within which the Epidaurus Ancient Theatre is situated, was one of the most extensive sacred sanctuaries in ancient Greece. It belonged to Epidaurus, a small citystate of the Classical period located on the nearby western coast of the Saronic Gulf, where the village of Palea Epidavros (Old Epidaurus) stands today. The buildings of the Sanctuary – temples, athletics facilities, the theatre, baths, etc. – were built in an elevated valley surrounded by mountains. The Sanctuary was linked to the ancient city of Epidaurus by an ancient road, large parts of which survive alongside the modern asphalt road leading to the site.

The construction of the theatre
As Epidaurus developed, various athletic and artistic contests, including theatrical ones, were added to the worship of god Asklepios, through which systematic medical care was developed in antiquity. These contests at the Sanctuary (held in the theatre, the stadium and elsewhere) formed an integral part of the activities conducted in honour of the god of medicine. Unlike other theatres of the Classical and Hellenistic periods, the theatre at Epidaurus was not modified during Roman times, and thus retained its original form throughout antiquity. The prevailing view among experts is that the theatre was built in two distinct phases. The first dates to the 4th century BC, a period of significant construction activity at the Sanctuary. The second corresponds to the mid-2nd century BC. The original layout of the Epidaurus Theatre stage shows that it was intended for the performance of dramatic works at the level of the orchestra. During the second phase, actors would have performed on a raised proscenium, leaving the orchestra for the chorus.

Architecture
The theatre is the best preserved monument of the Sanctuary of Asklepios at Epidaurus. It has a perfectly executed tripartite structure characteristic of Hellenistic period theatres: auditorium, orchestra, and stage building (skene). The orchestra is perfectly circular (19.5 m in diameter), with a floor of beaten earth bounded by a ring stones at its perimeter. An open duct running around the outside of the orchestra collects and drains the rainwater that runs off the auditorium.

In the first part of Aeschylus’ trilogy, King Agamemnon returns to Argos, shortly after the end of the Trojan War. Agamemnon triumphantly marches into the city and his palace, flaunting the Trojan princess and Apollo priestess Cassandra as his spoils of war. Clytemnestra welcomes her husband, all pomp and circumstance. However, it is quickly revealed that her enthusiasm conceals a well-orchestrated plan. She has decided to take revenge for the murder of their daughter, Iphigenia, sacrificed by Agamemnon to get the Greek ships afloat over ten years ago. The red carpet she rolls out for Agamemnon’s return foreshadows the impending bloodbath, when she and her accomplice/lover, Aegisthus, murder the king and his concubine.
With English surtitles. Director: Cezaris Grau z inis

The main hero is Chremylos, a bankrupt farmer who is at a loss to understand why he lost his fortune, despite being honest and pious. Chremylos and his slave, Carion, nurse Plutus to health. Blinded by Zeus, Plutus is unable to distinguish between the just and the unjust, the honourable and the dishonourable. When Plutus finally regains his sight, justice is accordingly restored. Aristophanes’ comedy is a wink to the audience, indicating what he would consider fair in an ideal polis: everyone getting their just deserts.
With English surtitles. National Theatre of Greece – Nikita Milivojevic

Electra, written circa 412-411 B.C., dramatizes one of the bleakest episodes in the Atreidae m ythology: the revenge for Agamemnon’s murd er. The main character, Electra, constantly relives the murder of her father, imploring the gods to punish his murderers. Her lust for revenge is rekindled by the return of her brother, the exiled Orestes. Their plans of punishment will culminate in matricide. Sophocles’ drama focuses on Electra, eschewing the moral problematics of matricide. Revenge is a conscious choice of the characters rather than a mandate of the gods.

Euripides is upset after finding out that the women who are about to celebrate the Thesm ophoria are bent on punishing him for his unflattering portrayal of female characters. In an attempt to escape, Euripides comes up with a plan: he decides to have a friend of his infilt rate the festival, disguised as a woman, and vindicate him. Mnesilochus is up to the task. At the festival, the women of Thesmophoria, the T hesmophoriazusae take turns accusing Euripides. Mnesilochus takes the floor and also speaks against Euripides, but eventually tries to support him.

Orestes was first presented in 408 B.C. A few days after killing his mother, Orestes is being relentlessly pursued by the Furies. Electra and the ill Orestes are faced with the wrath of Argos’ citizens, who wish to sentence the siblings to death. Menelaus, arriving from Argos together with Helen, is their only hope. Even though Menelaus promises to help Orestes, he decides against it after having a talk with his grandfather, Tyndareus. Orestes defends himself before the Ecclesia, the popular assembly, with his loyal friend, Pylades, by his side. However, he fails to change the verdict. Orestes, Electra, and Pylades decide to take revenge against Menelaus, planning to murder his wife, Helen, abduct his daughter, Hermione, and set his palace on fire.

The frogs by aristophanes

The Frogs was originally presented at the Lenaia festival in 405 B.C. Frustrated with the lack of great dramas presented in Athens, without any major tragic poets alive anymore, Dionysus descends to the Underworld to bring back to life a major poet destined to put a stop to the Polis’ downward spiral. With that in mind, Dionysus sets up a dramatic competition between Aeschylus and Euripides. Pluto is to judge the competition: the better man gets to return among the living. For Aristophanes, with his relentless satire of modern morals best exemplified in Euripides, the winner can only ever be Aeschylus.

An American in Santorini
Learning Holidays